Paralympic champion David Weir won his first race since London 2012 as he joined a field of more than 6,000 at Sunday's adidas Silverstone half marathon.

Iwan dropped the chequered flag at the world famous Silverstone track then quickly joined the competitor field in his attempt to break his half marathon personal best of 1:39:01.

In the able-bodied race, defending champion Scott Overall of Blackheath & Bromley Harriers, who ran the New Orleans Half Marathon last weekend, was fresh enough to cruise to victory in 65:41 in windy conditions. 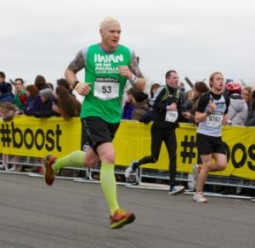 Overall was delighted with his win, saying afterwards: “I planned to run a tempo effort as part of my build up to the London Marathon in April so it gave me a lot of confidence. The conditions were tough, but it seems to be windy everywhere I race at the moment. There were some long, hard drags but I’m pleased that everything went to plan.”

The windy conditions were tough for the wheelchair athletes too, but nothing could stop David Weir in his first race since his four brilliant gold medals at the 2012 Paralympic Games. Weir led from the start to win in an impressive win 47:32.

Weir said afterwards: “I found the conditions tougher than last year [when Weir set a new course record of 45:20], but the race went well. I feel like I’m in pretty good shape considering the amount of time I’ve had out. This race revealed what I need to do in training, so I’ll knuckle down for the next seven weeks so I’m ready to give it my best shot and go for a record seven wins at this year’s London Marathon.”

Sarah Ivory won the women’s race by an impressive margin to finish in 72:34. “I felt great and went for it,” she said afterwards. “The race was really well supported too, which helped to push me on. It feels really good to have won; I’ve been trying to break 75 minutes for two years, so to knock more than two minutes off my previous best is brilliant.” 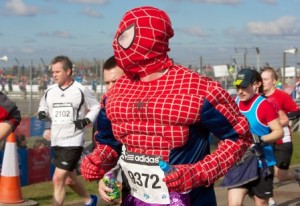 In the women’s wheelchair race, 17-year-old Jade Jones knocked an incredible 10 minutes off the previous course record to win in 62:09. Jones is too young to take part in the full London Wheelchair Marathon this April but she’ll take part in the Virgin Money Giving Mini Marathon, which she’s won twice. “I felt great out there,” said Jones. “Winning here has given me a huge boost before the Mini Marathon; it’s such an amazing event and the spectators really spur me on.”

Paralympic 200m champion Richard Whitehead, who had a previous personal best for the half marathon of 74:59, used the race as a training run for his London Marathon debut in April. Whitehead was pleased with his time of 1:30, saying: “Racing at Silverstone is great build up for the London Marathon. I’m a big guy, so my shoulders caught the wind a bit but the support here is brilliant so that pushed me on. Going from 200m world record holder to running the London Marathon this year will be tough but it’s an opportunity to give back to the public and I’m sure the crowds are going to be amazing thanks to the legacy of the Olympic Games.”

Bringing the celebrity field home, Iwan Thomas – no stranger to the famous Silverstone track thanks to the laps he’s put in there on his motorbike – managed a personal best of 1:38:01. Like so many of today’s 6,104 finishers, he was fine tuning his preparations for this April’s London Marathon in seven weeks time, when he hopes to go under four hours.