Newbies run off their feet in Kent!

More than twenty members of the newly established ‘Run off your feet’ running group in Kent recently completed their first 5k in Tunbridge Wells.

The Southborough-based running group was established earlier in the year by group leader, Liza Mclver-Hall. With the support of the Kent Running Project and on completion of the Leadership in Running Fitness course, Liza decided to start up a ‘small’ running group for friends.

It ended up being slightly more popular than she expected, with twenty-three people turning up to the first session, raring to go! They embarked upon a 10 week training plan and recently 21 members of the group put their newly acquired skills to the test, by completing a 5k Race for Life in Dunorlan Park, Tunbridge Wells.

Group leader, Liza Mclver-Hall said: "I was like a proud mum watching them!  All group members completed the race in very respectable times, despite the overwhelming temperatures and the steepest of hills. They also managed to raise nearly £3,000 for a very worthy cause. Our next meeting is going to be held in a local pub to celebrate their success, followed by resuming our regular weekly sessions. Several members have now decided that their next goal is a 10k race!"

The group is currently free of charge and now boasts a whopping 33 members! The comments posted on the Run off your feet Facebook page reflect how successful the group has become: 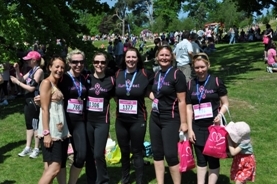 Hayley Clifton wrote: "Inspired by last night’s running club, I am off for another run tonight."

Ruth Nash wrote: "First running club tonight, really fab, can’t wait for the next one, really did me a lot of good."

Kirsty Trainor-Wood wrote: "You have really helped us get the best out of our selves; the inspiration you give us will hopefully see many of us go a long way, thank you."

Lucy Tomlinson, the Kent Running Activator, said: "Run off your feet is a perfect example of what we’re trying to achieve through the Kent Running Project. Group leaders like Liza have the drive, passion and motivation to get people running and running more often. Her group and her members are an inspiration to anyone who is thinking about giving running a go."

If you would like to start running, there are a number of beginner running groups like Run off your feet, welcoming new runners across Kent now. To find out more, visit: www.kentsport.org/run or contact Lucy Tomlinson, Kent Running Activator on 07730 870696 or lucy.tomlinson@kent.gov.uk.