Run England groups are great for keeping fit and having fun, but a couple of groups in the London area have also been doing their bit for charity.

The Springfield Running Group and Grangewood Park Amigos have both taken part in Cancer Research’s Race for Life events. For most of the members this was their first experience of running in a 5k event!

Freda, Amanda and Jenny, who are members of the Springfield Running Group in Clapton, Hackney, took part in their first Race for Life 5k run on 22nd May in Regent’s Park, and raised £950 between them.
The ladies said: "We enjoyed the run immensely and without our leader Annette's training and advice we couldn't have done it. Our training really helped on the day. Freda completed the run in 39 minutes, Amanda came in the top twenty and Jenny completed the run in 56 minutes. We are all looking forward to our next run!" 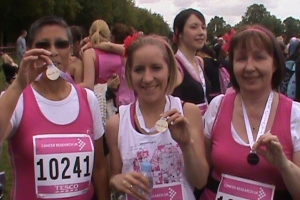 Grangewood Park Amigos also took part in a Race for Life 5k event in Crystal Palace last Sunday. A year ago most of the group were just walking and doing some jogging, however on Sunday they all ran at their own pace around the park. The question they were all asking after the event was: "What’s next?!"
Well done to all these Run England members and good luck with your future events!