Running in a group is just one tip (but a great one!) to help you with summer running conditions!

It’s official; summer is finally here and with it a whole set of different things to think about when you’re heading out for your RunTogether session.

Your group leaders will recognise the fact that when five times Olympian Jo Pavey, a mother of two, 40+ years old and still running strong tells us you best head into the summer with a plan you know it makes sense.

And that’s not because we all have world leading 10ks on our minds; no Jo knows runners all too well, as does your group leader. Their personal plan will have all the advice you’ll ever need to be able to cope with the endless scorchio days the weather forecasters have promised (as well as they less inspiring grey days) so have a chat and see what they have to tell you.

So, whether a new to running this summer or perhaps like so many of us, a runner keen to get back into the swing of things now the winter and its dark cold nights and seemingly endless restrictions have passed let’s take a look at the things you should include in your plan to make these next few months truly memorable. 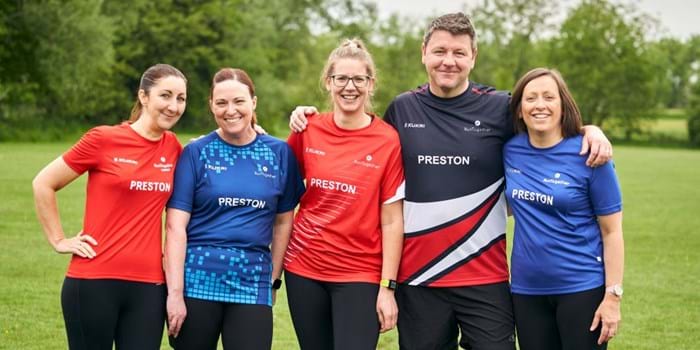 1. Kit yourself out correctly

It’s not going over the top to look the part, even in the summer. In the winter we take wearing the right gear for granted – jackets and thermals, that kind of thing – but we can often be a bit more blasé about it all in the summer. Of course, a plain old shirt will do the job, but make sure it’s a breathable one; forget cotton – too heavy and unforgiving. And even taking the simple precaution of wearing a sun-cap with some ice under it could help you reduce your 5km time by a fair bit – 5 per cent say scientists so be ready for a quicker, easier run just because you kept your head cool.

Brands such Kukri, who are RunTogether’s online store partner, recognises that and while they don’t make ice (that’s your job), they do make super breathable, light coloured running kit designed to regulate your core temperature, as shown in this image (which was taken in the recent RunTogether photoshoot with #MadRunners). But check out our store to find out more.

It’s worth investing in some sports sunglasses not just for your image. They’re perfect for the summer in all sorts of ways. For a start they stop you squinting in the bright sunlight which in turn helps you relax across your shoulders, which then creates a more fluid running form and you run quicker. It’s a simple way to make your running so much easier. And of course, they reduce the effects of damaging UV so look for a lightweight, vented pair of running-specific glasses. Truly, one of the best investments you’ll make when it comes to summer kit.

This might seem a bit obvious, but obviously hanging out before the run in the scorching sun won’t be doing you any favours. It makes perfect sense to keep your core temperature as low as possible. If your RunTogether group meets in a sports venue or cafe, all the better. Take a few minutes to get a drink before and after. Simple, but massively effective. Unless, of course, you’re going to the Sahara then perhaps it needs a little more planning! Did you know, for instance, elite athletes sometimes wear an ice vest as part of their warm-up? We say wear a vest. Easier and just as effective in England.

4. Be ready to Adapt

Yes, your Group Leader will have perhaps told you to get out regularly at, say 11am every morning. But when it’s hot, it’s perfectly acceptable to say to yourself ‘I’ll go later, or shorter than I planned’. It’s not wimping out; the opposite in fact. It’s maximising your running time so that it’ll be the best experience possible. Go in the morning, or later in the evening or simply cut the pace and enjoy and easy run with your mates in the RunTogether group – exactly what it’s been created for!

We all know that running with someone else is so much better for you for a huge amount of reasons and in the summer that can mean keeping a watchful eye out for anyone struggling in the heat. Seriously, that can hit you in a second so running with RunTogether members is certainly a great idea in the hot weather. You or they will know of a shady run or one that takes you past water. That RunTogether group knowledge is certainly a resource that’s made for right now. Utilise it to your advantage.

6. And don’t forget to drink

As we all know, water plays an unbelievably important role in our lives but as you also know, we sometimes don’t take too much notice of what we need. When you’re running in the summer, always, always make sure you are hydrated. Remember, if you are dehydrated going into a run, you limit the body’s ability to remove and regulate heat. Water is fine but heavy sweaters may want to consider an electrolyte drink or supplement.