Hazel Shaw attended our Guide Running workshop led by Chris Husband in Mile end last month.  She keeps a blog and as well as recording how much she learned at the workshop, Hazel is also training for the London Marathon next year with visually impaired runner Gill.

"Two women: both completely unfit; one nursing injuries and a baby; the other one blind, are training for the London Marathon. Tied together."

Hazel told us, "I just thought the marathon training blog might be of interest to those who were thinking about doing guide running for amateur runners and recreational joggers. The best bits are in the first few weeks where we were literally learning how to run together and I was learning to guide, so best to look at the tab called 'from the beginning'." 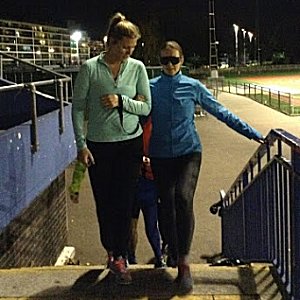 Hazel commented, "It was great to see the England Athletics are putting effort into to it at an amateur, recreational level, not just for pros and elites. We will never discover and develop elite VI athletes if we don’t get them jogging and then running in the first place.  It was a great workshop, and I will recommend it in the future."