Running groups in Durham up for regional awards No fewer than three Run England groups, along with a group leader, have been nominated for the Regional County Durham Sports and Physical Activity Awards for 2013.

Teesdale Pink Ladies, Run in Chester-le-Street and Durham Mums on the Run have all been nominated for their contribution to physical activity along with Consett Run England who’s coach Ian Young has been nominated for coach of the year.

The awards are a fantastic way to highlight the work of local clubs and groups in the County Durham area and we're delighted to see so many Run England groups involved! 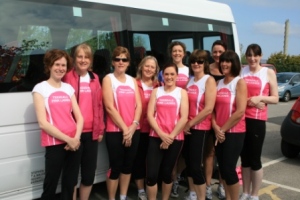 Sarah Watson, Run England Activator for County Durham, said: “It’s great for the groups to get the recognition for their involvement in getting people active in the area, a lot of our members had never ran before and it’s a great way to thank them and their group leaders for all their hard work, we wish them all the best of luck!"

Those who win their regional categories will go forward to the County Awards held in October - congratulations to all the individuals involved in these fantastic running groups!