Runners in the sleepy village of St Johns in Surrey were glad of their training when they were chased by zombies recently.

The St Johns 'Run for Fun' group - a free Run England running group - were jogging across the bridge at St Johns Lye when the zombies lurched out of the woods, scattering the run group and prompting a turn of speed (accompanied by screaming) that had nearby dog walkers wondering what was going on.

Apparently walkers had seen the zombies lurking in the woods as the running group assembled on the village green nearby. When runners jogged over a little bridge into a grassy woodland clearing, zombies leapt out.

Luckily, dedicated and sustained running over preceding weeks fitted the runners to escape: but stupidly they went back, unable to believe their eyes, to see if it had really happened. In fact, like the doomed supporting cast in a cheap horror movie, runners just kept going back again and again to the scene, of course being forced to flee each time.

Fear lent wings to the runners who attained running speeds hitherto undreamed, of in their desperate flight. Eventually the group fled back to the village green, where local people were assembling tents and shelters for the village fete - but horrifically the zombies dared to brave the open space. Horror turned to despair as the running group realised that not only would no-one come to their aid but no-one at the fete even cared about their fate. 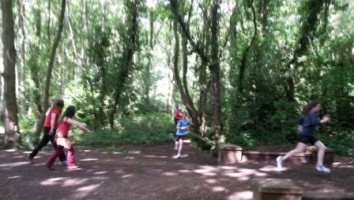 Luckily, in an unexpected development Zombie Power came in handy when one of the fete tents threatened to blow away and zombies and runners pitched in together to save the day and through common endeavour realised that diversity and inclusiveness - even for zombies - is fun.

Group leader Chris Bore explained: "Running intervals is a common training technique - slow runs with short bursts of speed. The trouble is it gets a bit pointless and boring: but when zombies lurch out at you they prompt a natural interval training that also makes you - and any watching pedestrians - laugh."

The group started in May. Chris describes the group's ethos: "Running is fun - you should do it because it is fun in itself, not always to train for some big challenge. Also, a lot of runners pick up injuries and put themselves off running by going too far, too fast when they could be learning to run freely and enjoyably at a realistic pace. Our group is about 'easy miles' - relaxing running, in a group, socialising so the running itself is fun. But sometimes you want to throw in a few zombies for a bit of variety and so we remember that a bit of speed can sometimes come in handy."

The group meets alternate Saturdays at 10 am, on St Johns Lye. They are listed on our group finder map and have a Facebook group - and the local coffee shop, Seasons, keeps a copy of the timetable for those who just drop in.