A running group in Essex recently staged their own pilot running event on the 2012 Olympic mountain bike circuit.

It was the first time the track had been used for a running race over the famous course and the competitors certainly found the going tough with many saying it was the toughest 10k they had ever competed in! The snow that had covered the course earlier in the week had disappeared but the course was further softened up by a down pour just before the start.

It was an exclusive opportunity for runners to test their stamina and endurance over 10k of mud, gravel and of course endless hills. The venue is currently closed to the public and this pilot event offered the chance to assess its suitability as a race location. 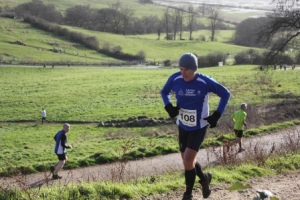 Castle Point Joggers and their race management company, Nice Work, are hoping to make it an annual event once the course opens to the public later in 2013.

The race was won by Billericay Strider’s Crispian Bloomfield in 40 minutes and 17 seconds with Ben Cope from Serpentine Running Club in second (42:07) and Ben Franklin from Southend AC third (42:41). First Lady home was Hayley Hawes from East Essex Tri club in 48:51.

One entrant said: “Thanks very much to castle point joggers for putting on a terrific race this morning. Very well organised, a very well thought out course, with lots of smiling marshalls, always encouraging the runners, even though it must've been cold standing around in the strong wind. You'll struggle to find a hillier 10k race than that!”