Runners from running groups in Manchester recently took part in a spectacular public art performance, lighting up Salford Quays through the simple beauty of running.

Arts charity NVA’s Speed of Light, an extraordinary public art performance, brought Salford’s waterfront to life between Thursday 21st and Saturday 23rd March 2013. A centrepiece of the  Edinburgh International Festival and recently staged in the docklands of Yokohama in Japan , the night-time work uses light, intentional movement and sound to change the way we see and feel about a chosen environment. 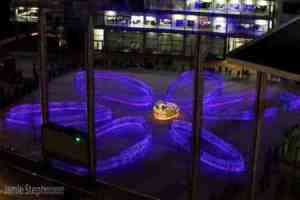 Hundreds of runners in specially commissioned LED light suits, led by Run England group leaders from around Greater Manchester created beautiful, choreographed patterns of light flowing around The Salford Quays and Media City. Free and non-ticketed for the watching audience, it was seen as a piece of abstract art on the grandest scale: monumental but surprisingly quiet and reflective.

Liam Browne Run England Activator and group leader said: "Being given the privilege as a group leader to help create such a masterpiece of running art and to lead other runners through a maze of complex patterns whilst performing in front of thousands of amazed spectators was a fantastic experience. It was something completely different and a celebration of being a runner!"