Congratulations to the winners of three recent Run England member competitions who have won prizes such as guaranteed Virgin London Marathon places, an adidas miCoach system and a pair of the latest Mizuno running shoes!

Various competitions for Run England members have been held in the first two months of 2012 to encourage people in their running, especially with many people making New Year’s resolutions to get fit.

Emily Simpson from Swindon said that her reaction to receiving the news that she had won a guaranteed place in the 2012 Virgin London Marathon was one of “shock, amazement, excitement, nervousness and a little of terror!”

Also receiving a guaranteed VLM place was Andy Money from Cheswick Green in Solihull, we wish them both the best of luck and hope training is going well for the big day!

Our second competition of the year was our Santa run competition for a pair of the latest Mizuno running shoes which saw dozens of entries over the festive weeks. Entrants just needed to post a photo of themselves or their running group in festive attire – either at an event or simply on a Santa-themed run. 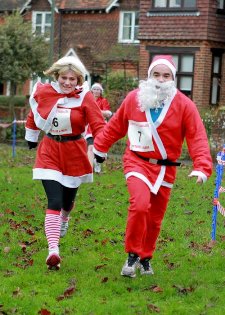 Kevin Martin from Aldershot in Hampshire was the winner after posting the above picture of himself and his wife, Tina, at the 5k Santa Dash (& Toddle) in Cranleigh organised by local running club, Cranleigh Tortoise and Hare Runners, in aid of Surrey Air Ambulance. The photo is courtesy of Simon Hart Photography (www.simonhartphotography.co.uk).

After starting running by taking part in a training run in place of his friend who couldn’t make the run, Kevin was soon bitten by the running bug and managed a local 5k “without stopping, getting injured or keeling over”.

He added: “I’m looking forward to trying out the latest Mizuno running shoes, although it will mean I will have to cross off one of my excuses for not completing the Half Marathon!”

Becky Moody – an Art Psychotherapist and ex-smoker and “reformed party girl” from West Cumbria – was the lucky winner of an adidas miCoach – our final prize of the year (so far!) for our refer a friend competition.

She said: “If you told me this time last year I would have come to love running as I do now I would have laughed, a lot.”

But Becky agreed to do a Race for Life 5k in memory of her Grandma with the aim of completing the entire race without stopping. Since then Becky has done a lot more running, won her first sporting award since school, lost a stone in weight and seen her confidence shoot up. She also uses running as a way to escape from her busy life.

She added: “Running has not only made me a stronger person physically, but mentally and emotionally as well, to win this prize, almost exactly a year after I started out on my running journey, feels like the cherry on the cake, I couldn't be more pleased. Thank you Run England!”

Well done to all our winners and thanks to everyone who has got involved in our competitions. If you didn’t win, don’t worry, there are plenty more to come!