SE Fitness, a group formed by experienced runner and running group leader Sally Ellis is going from strength to strength since coming on board with Run England.

SE Fitness is a running group which started as far back as 1996! As a semi-retired athlete, Sally loved running and wanted others to get that same feeling - the buzz of being active in the outdoors.

Her running group has grown gradually over the years and has now become hugely popular with over 500 members. She has 30 group leaders who deliver walking and running sessions for everyone from those completely new to exercise through to more seasoned runners and walkers.

The group leaders use their experience and knowledge to motivate and encourage others to improve their fitness. 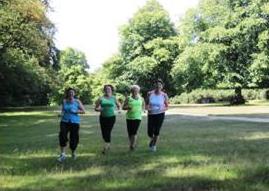 SE Fitness welcomes anyone over the age of 16, from all walks of life and genders -though more women do attend the daytime sessions. The groups meet in the mornings on Mondays, Wednesdays, Fridays and Saturdays but there are also groups on Mondays and Wednesdays in the evening.

They meet at Wyndley leisure centre, with most of their sessions taking place in the beautiful Sutton Park.

From January 2012 they are starting new running groups on Tuesday and Thursday evenings. They are also promoting a free taster – an absolute beginner walking group on January 18th. This will allow those with very low levels of fitness to join in and will be around one mile. They also offer the buggy walk for those mums with new babies.

For more information on the SE Fitness running groups please visit the website at www.sefitness.com and to join Run England for free, go to www.runengland.org/join.