Around 200 people took part in a new event in Newham, London, last weekend, helping raise the profile and improve the accessibility of sporting activities in East London as part of the London 2012 legacy.

To start off the day, Regional Activator Coral Nourrice sounded the starting horn for the family Fun Run, a 3km event for ages five years and over, before participants got involved with the 60 metre portable running track.

Coral said: “It's great to see so many Newham residents keeping fit and getting really enthusiastic about running. The buzz and excitement among them as they were all warming up today was electric and it was really inspiring to see the effort they all put in.”

Run England Group Leaders Winnie Akyeampong and Bisi Imafidon led a warm up session before the 5k and 10k runners set off. Regional Activator Anne Marie White was also at the event with a Run England stall to give people more information. 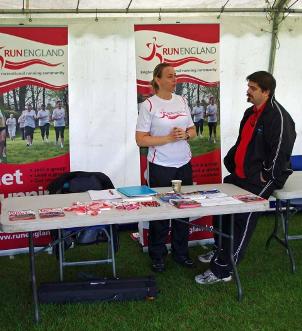 Anne Marie said: “Clearly residents across the host boroughs are passionate about completing the run and had put a lot of effort into their preparation. I was delighted to be here in person to support the runners and see the event take place and want to congratulate the participants who took part and encourage them to sign up to become Run England members.”

Everyone who took part was rewarded with an event t shirt, medal, goody bag and Run England membership. The event was co-funded and organised by Credit Suisse, and by the East End Road Runners via a Sport England Sportsmatch award. The Challenge is further supported by The Run! Project, Run England, the London Borough of Newham and the Host Boroughs of the London 2012 Games.