Johnny, who still goes running three times a week, strongly backed the official England Athletics recreational running project, which offers free membership and quite simply aims to get the nation active through running. He was joined at the launch by Lord Mayor of Sheffield Cllr Sylvia Dunkley. 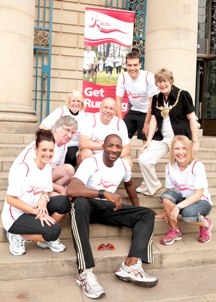 With its world class sports facilities and the beautiful Peak District on its doorstep, Sheffield is leading the way for Run England, which is a nationwide project, as a city that loves running, with 11 Run England groups already set up in the area.

“To me running is everything – I can remember doing the Sheffield Marathon once, and I’m not a fast runner but I’m a decent runner, and this old couple ran past me and said ‘come on son, keep up with the old ones’ and I couldn’t believe it!

“Now obviously I’ve got a little bit older I can’t hammer the roads like I used to, due to the wear and tear on the body, but I go at least three days a week.

“Today I came to promote the Run England project on the City Hall steps, it’s a lovely sunny day and hopefully someone might look at me and think ‘this guy is 44 and he’s doing it, why shouldn’t I as well?’”

All Run England groups are led by qualified and insured Group Leaders such as Sean and Maria Rodgers who lead the ‘Team Manvers Run’ group who meet on Tuesday and Thursday evenings at the Boathouse in Manvers and also took part in today’s photo shoot.

Sean ran for approximately 12 years, competing in distances from 10k to the marathon, but just over two years ago he suffered a life-threatening cardiac arrhythmia when his heart suddenly stopped beating and on recovering he struggled to keep motivated and get back into running, so the idea of setting up a Run England group appealed to him. 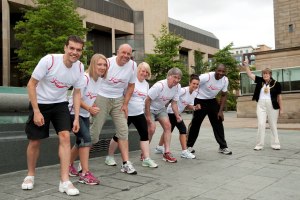 Along with Sean and Maria, qualified leaders Claire Spencer and Kevin Doyle from Kimberworth Striders athletics club, who are setting up a Run England group for beginners, were also there to support the launch, demonstrating how working with local athletics clubs is a key part of the project.

Andrew Moncrieff is a running success story of the highest order and also came to support the launch. He attended Activity Sheffield’s cardiac rehab programme after having a triple heart bypass.  After completing the block of circuit classes he was keen to get back to more exercise and joined the Run England group at Millhouses Park, and is now trying to get his 5k time under 37 minutes.

Andrew said: “I took up running in October 2009. I had had a heart attack and was given a triple heart bypass. For my birthday I was given an entry into the 3k fun run which runs alongside the Sheffield Half Marathon.

“Now I do the Endcliffe Parkrun every week and meet up with the Millhouses Park Activity Sheffield Run England group every Thursday and I’ve lost a stone since I started running.” 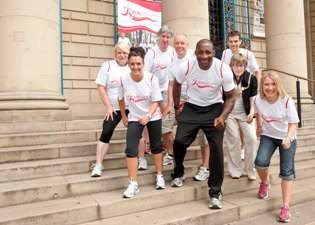 Run England project leader Geoff Wightman said: “More than 4000 people have signed up to take advantage of the support and advice Run England offers nationwide, many in the Sheffield and Yorkshire area.

The event, helped by lovely sunny weather, was a great success and proved that whoever you are – regardless of age, fitness level, aspiration, background, or location – Run England can help give you the support and encouragement you need to get started on your running journey.

Check out the photo album from the event on Run England's Facebook Page at www.runengland.org/facebook.